skip to main | skip to sidebar

http://www.deerstalkers.org.nz/wp-content/uploads/2013/06/HW-181-Book-Auction.pdf
Posted by Napier Deerstalkers at 4:13 PM No comments:

The Annual General Meeting of the Napier branch of the New Zealand Deerstalkers Association is to be held 27th May 2013, 7.30 PM
All members welcome and encouraged to attend.
Posted by Napier Deerstalkers at 10:25 PM No comments:


A reminder that the Napier club judging is this coming Saturday 25th May.  9am cut-off for competition entries on the morning.  The clubrooms will also be open between 6pm to 8pm on Friday night for dropping off entries.  If neither of these times suit you can also drop them into Mike Marston at Eastern Truck & Marine during business hours this week.  Entry forms are available for download from the club website here: http://nzdanapier.org.nz/pdf/Napier-CompForm.pdf or from the clubrooms.

Hawkes Bay judging is the following day (Sunday 26th May) at the Hastings Deerstalkers clubrooms, 1534 Maraekakaho Road, Bridge Pa.  9am cut-off for entries also.
Posted by Napier Deerstalkers at 6:41 PM No comments:

Here’s a story of my first club trip into the Tussock Hut in November 2012
Party: Mike and Jeff Marston, Craig Mitchel and me (Heath Faulknor)

After a dodgy forecast, fly in day for the Napier Branch Spring fly in trip dawned a bit wet but Chris Crosse at East Coast Kawekas managed to get everyone into a hut.  The Tussock boys were one of the last in so with the gear stowed at the hut and a quick geography lesson with the hut maps the first evening saw us all split up and head off for a deer or 3. The Marston's went out to a long range spot which we (I) later named rumridge, Craig went up the valley and I opted to look at a side creek close to the hut with some nice scrubby guts.

With a vantage point sorted out I settled in for the evening in some prime tussock/ scrub country. With the light fading I finally picked up the distinctive white patches which had the brain thinking ‘that’s a deer’s arse’.  Sure enough 2 sika hinds materialised out of the tussock.  Unfortunately for me these deer were up the next side creek downstream so I settled in behind the binos and got some eye time on watching deer as they fed their way back up the gut and into the scrub.

Still, a promising start, I thought to myself heading back to camp and with a shot heard up rumridge way I was expecting some meat hanging up and a story of a 1000 yard running neck shot.

Back at camp we had a debrief of events and heard how Mike and Jeff had seen a few deer and Jeff had a crack at deer with the new 7mm Mag but had lost it, nevertheless some rum was in order and all I can say is that some serious rationing was in order to see the rest of the trip out!! 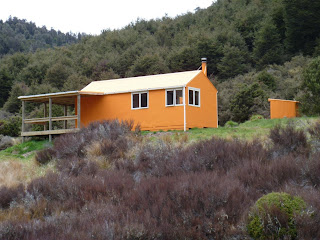 A lateish start had us all heading up rumridge for a look at the country and also see if we could find Jeff’s deer. She is an awesome spot for the magnum boys that’s for sure. We glassed for a while and with no deer about we crossed over the gulley and headed up to the clearing where Jeff hit the deer, after some searching no sign was seen so we split up again. Craig and I headed along the ridge to some native patches further along which looked promising. We found some more primo country and also spied a ridge in the distance down the valley which had us thinking fly camp.

The day was uneventful in the deer department but sign was about in the tussock/ scrub guts. Heading back up the valley to the hut I cut up a side creek to overlook the area which had the 2 deer in it from the night before. But with hunting being hunting and not shooting, the deer didn’t arrive on queue and I headed back to the hut empty handed.

That night we had a full hut as 4 hunters turned up after midnight from the Harkness hut which was full. These boys sure loved a good walk having being dropped off up Te Puke way and also knew how to shoot, collecting 2 deer on the way up the valley. Two of the younger lads also liked a good joke and managed to smuggle a decent sized rock in to an older guy’s pack for the hike out the next day. They managed to choose the biggest of the old boys to pick on and it didn’t help he was wearing a back brace as well. When Craig mentioned if it was a good idea when he finds out, the younger guys reckon it was well worth it and they would out run him anyway. Seeing him hoist his pack up before heading off it took him 2 tries to swing it up over his shoulders and it was hard work not breaking into a smile.

Today some bush hunting was in order so I headed up the valley to the Mangatainoka hut track.

After a quick climb I was soon on the ridge and sidling through the upper Mangatainoka stream creek heads and working my way down the valley. The creek heads had some nice open areas to catch a deer in the open but were steep. With pockets of sign about, deer were here alright. A lot of small wind fall made the going a bit loud for me with only the one spooked for the day.

So I arrived back empty handed again, but hey I was consistent.

Craig doubled my tally for spooking for that day and came back with a top tip, when hunting leave the barley sugars for when taking a spell as its hard to whistle a spooked sika to stand still with a barley sugar in ya mouth.

Fly camp day. Craig and I loaded up our packs and with the faithful Huntec biv headed down the valley to the spur we had spied from rum ridge which looked like a good spot to camp up and spend some time glassing.

Having walked the valley track for a hour we cut up a tussock side creek and hit a manuka side spur which as luck would have it had a nice cut track which made the going pretty sweet, we soon hit the native tops and wound our way around the bush edge which brought us out on a nice tussock nob which provided enough room for the biv and also a nice open spur which we could glass off.

With camp made we had an early tea and around 5ish headed out to start looking, we had gotten only 100m from camp when a sika squeal had us looking at each other thinking ‘that’s early’ and also ‘where is she’. We hunkered down and scanning the feet first Craig finally located a sika hind on the far spur, the one hind soon turned into 4 hinds which were feeding their way around the spur towards us.

We quickly hatched a cunning plan to close the distance and with time and wind on our side we made a cautious approach to where they should be and yep still there so we tried to sneak in to around 200y. When we finally popped our heads over the ridge expecting to see 4 hinds obliviously feeding away they had vanished, crikey now what. With the options of waiting it out in our current position of heading back to our last location when we had seen them we opted for plan B.

We snuck back into position and couldn’t find the 4 we were after but an obliging hind and stag turned up. Craig offered the shot to me so with the heart pounding I positioned the pikau under the fore-end, wound up the Khales to 9x and tried to calm the nerves. The stag was in no hurry so with Craig spotting I positioned the cross hairs on the shoulder and fired.

HIT, the stag was down the hind exited stage left. I quickly worked another round into the chamber and was checking with Craig to confirm he was down for the count. After waiting for a couple of minutes and with 4 stiff legs in the air I was finally confident he wasn’t going to do a Houdini on me and we gave some hi 5’s. Not only was it my first sika, but it was a stag and also my first animal with my new T3 .308 bushpig (thanks Norm).

I ran off down the ridge and checked out the stag which turned out to be an even little six pointer in prime condition.  With the antler point re-counting over it was time to check out my shot and it was pretty bang on, a nice entry hole through the fore quarters into the engine room  and a bigger exit had this stag going nowhere fast, those 130gr TTSX Barnes sure do the business. A quick photo session was followed by some tips on butchering from Craig and I was soon saddled up with a stag on my back and a head in my hands, o for awesome. 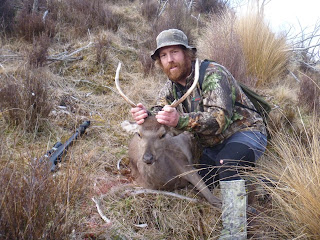 The next morning arrived with thickening cloud and a steady southerly, with Craig the only one keen to have a look I enjoyed a lie in and when Craig arrived back at camp we dressed out the deer and packed up looking to get back to the hut before we got a wet arse.

We arrived back at camp to find some meat in the safe and heard that Jeff got one on the board as well. There wasn’t a heap of meat hanging up but I’ll let Jeff     explain why at the next meeting if he wishes to.

Our luck with the weather finally broke and with the pressure off for me I spent the remaining 2 days making sure my head still had 6 points on it and also doing some short hunts close to the hut to look at some new areas. The last day had us stocking up the wood pile and giving the hunt a good clean. Chris turned up on queue and we were soon safely back the hanger. 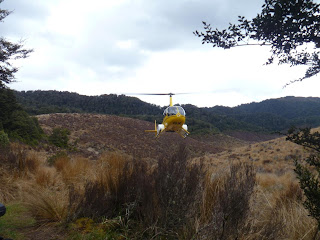 Chris coming into the pad

Cheers to the Mike, Jeff and Craig for the good times on the trip and roll on the next club fly in trip. Tussock Hut is a special place and I can see myself back there soon, but I’m keen to check out some other country and by the reports back from another fly in trip the Lower Ohane looks good with plenty of deaf deer about eh Bruce.

Cheers Heath
Posted by Napier Deerstalkers at 8:04 PM No comments:

Email ThisBlogThis!Share to TwitterShare to FacebookShare to Pinterest
Labels: story

Feedback and info on Ruahine FP facility cutbacks
Ken Mills (DoC Ongaonga) will address the Hastings NZDA Clubrooms on Wednesday 1st August regarding the proposed Ruahine Forest Park Facility Network Management Review.  All welcome, please attend and make your feelings known about the possible permanent loss of up to 50% of huts and tracks in the Ruahine Forest Park.

Posted by Napier Deerstalkers at 9:54 PM No comments:

Posted by Napier Deerstalkers at 9:52 PM No comments: